Mai Cheng’s paintings contain calligraphy, pictograms and symbols from all our history, all over the globe. Her aim is to let characters from different cultures and different ages communicate in a way that highlights their common origin – a kind of dialogue between the present and the cultural roots that may have arisen when human "drawings" of ancient time were abstracted into modern communication.

“It is important to me that people who see my work, wherever they come from and whatever their age, find something they recognize,” says Mai Cheng.

In her work with pictograms and symbols, she has found links between cultures that otherwise are historically and geographically separated. She believes that the common human aesthetics which characterized the “drawings” (expressed through pictograms and calligraphy) of our ancestral human beings, are perceived as archetypes today. If we accept this idea, ancient pictograms are as relevant in today’s world as they were thousands of years ago.

Mai Cheng creates her paintings through a mixed technique that she has developed and perfected since the 90's, a technique not only based on oil and acrylic paints, but also varnishes, shellacs, resins, glue, wood and gold leaves. She often tries to make parts of the paint crack, primarily to give the pictures materiality, but also to remove some of the time dimension: The paintings should appear both old and new – at the same time. This way, it is easier to create a consistent aesthetic in which characters we know from ancient civilizations become part of a modern expression, with colours that may also belong to our own time.

The first exhibition of "Feng-shui Art" in Oslo

Review of first exhibition in Paris

Other art reviews and articles

Her own site about her art

Some of her older paintings: 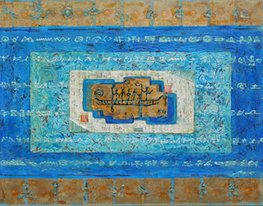